The third of my four installments (here’s one and two) of Inktober. And oh boy, get ready for some strange-looking sketches in this one. I tried to use a new kind of pen that has two tips and can make way thicker marks, which has resulted in many many failed drawings and a few semi-successful ones. I present to you the semi-successful ones. (For those interested in drawing implements, I’ve been using a 0.35mm Pigma Micron but this time tried out a Tombow Dual Brush Pen, N15 black).

The problems I had with my tools this week, believe it or not, fits thematically with what I’ve been trying to draw: when things break. Or when things (tools) don’t work the way you want them to.

What does this have to do with time? Let’s look at the first picture I’m sharing, a drawing of one of my shoes. 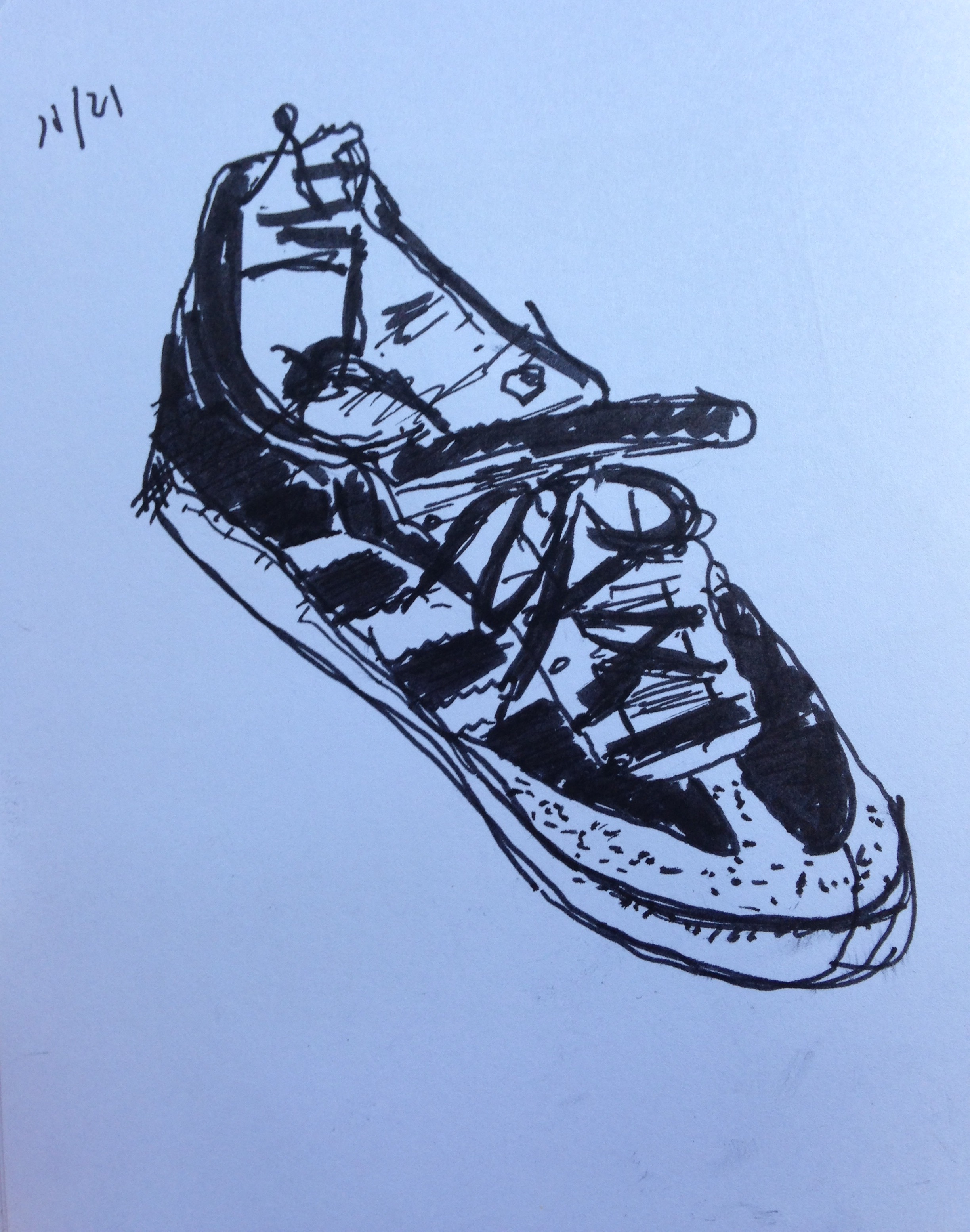 You probably can’t tell from what I drew here, but this shoe is thrashed on the inside. The back heel has completely torn through the cloth and this bluish plastic is exposed. There’s also a split starting on the outer-toe area through the leather but I couldn’t really draw it that well. On a side note, looking so closely at my shoe for so long reminded me of this scene from Don DeLillo’s Underworld - from “Sometimes I think…” to the bottom of p. 543 - in which a boy is asked to name as many parts of a shoe as possible. I, in particular, had problems with the vamp.

Point being, the shoe is beat, from toe cap to insole. It’s spent. Both of my shoes are. I’ve worn these sambas practically every day since I bought them and often play soccer in them. I will have to buy a new pair very soon. What’s interesting is the way in which I learn that they need to be replaced: I need to buy a new pair because the shoe, as a tool, has “stopped working.” It’s a trigger of some kind that produces an almost automatic response: thing you need breaks? Time to get a new one! Normally, I don’t think about my shoes at all. They’re comfortable and easy to walk in, so they’re just kind of there - they’re “present at hand” (or “at foot”! Ha!). I know they exist, but I’m no more aware of them than I am of my feet, legs, or hips while walking around. That is, until something goes wrong - the felt wears out and chafes my heel; I start to get blisters; the bottom cushioning wears through; the shoe splits at a side.

For Heidegger, when a piece of equipment breaks or malfunctions it acquires a new kind of visibility, as though it were semi-transparent before while being used. (If you’re wondering what Heidegger is doing here or want more context, check out my first and second posts). Most importantly, this new visibility changes how and what the thing is - the implication being that situational contexts actually change what things are for us (Dasein) in the world. So when my shoe ‘breaks,’ it changes how it is in the everyday-ness of my world. It stops being a shoe shoe and starts being a trash shoe. Its time is up. In his 1935 essay “The Origin of the Work of Art,” Heidegger himself actually looks at a famous pair of shoes as an example of how an artistic representation of them can pull together and have the power to disclose a kind of life-world despite simply being ‘equipment.’ And it seems to me that a totally trashed pair of shoes does this very differently than a pair fresh out of the box.

So I wonder: when a thing’s lifespan as a thing is over (a lifespan determined in large part by its use context: i.e. a pair of boots that sits in a closet all year vs. pair used by a carpenter or roofer on worksites almost every day), what kind of lifespan does it acquire as something broken? How does the life of a trash shoe different from a shoe shoe, assuming that it’s possible these two shoes might be different things for me? An illustrative example would be something like comparing how we think of the ‘lifespan’ of a car battery with the ‘lifespan’ of a dead car battery: the first has to do with human use, the possibility of travel, cold winter mornings, brand reliability, maintenance, usually a matter of years; the latter with molecular half-lives, recycling practices, landfills, all on a much longer scale.

Another sketch with the new pen, this of an abandoned vehicle, engine- and battery-less. With some color! (If you want to see the original I was trying to draw, check it out here). 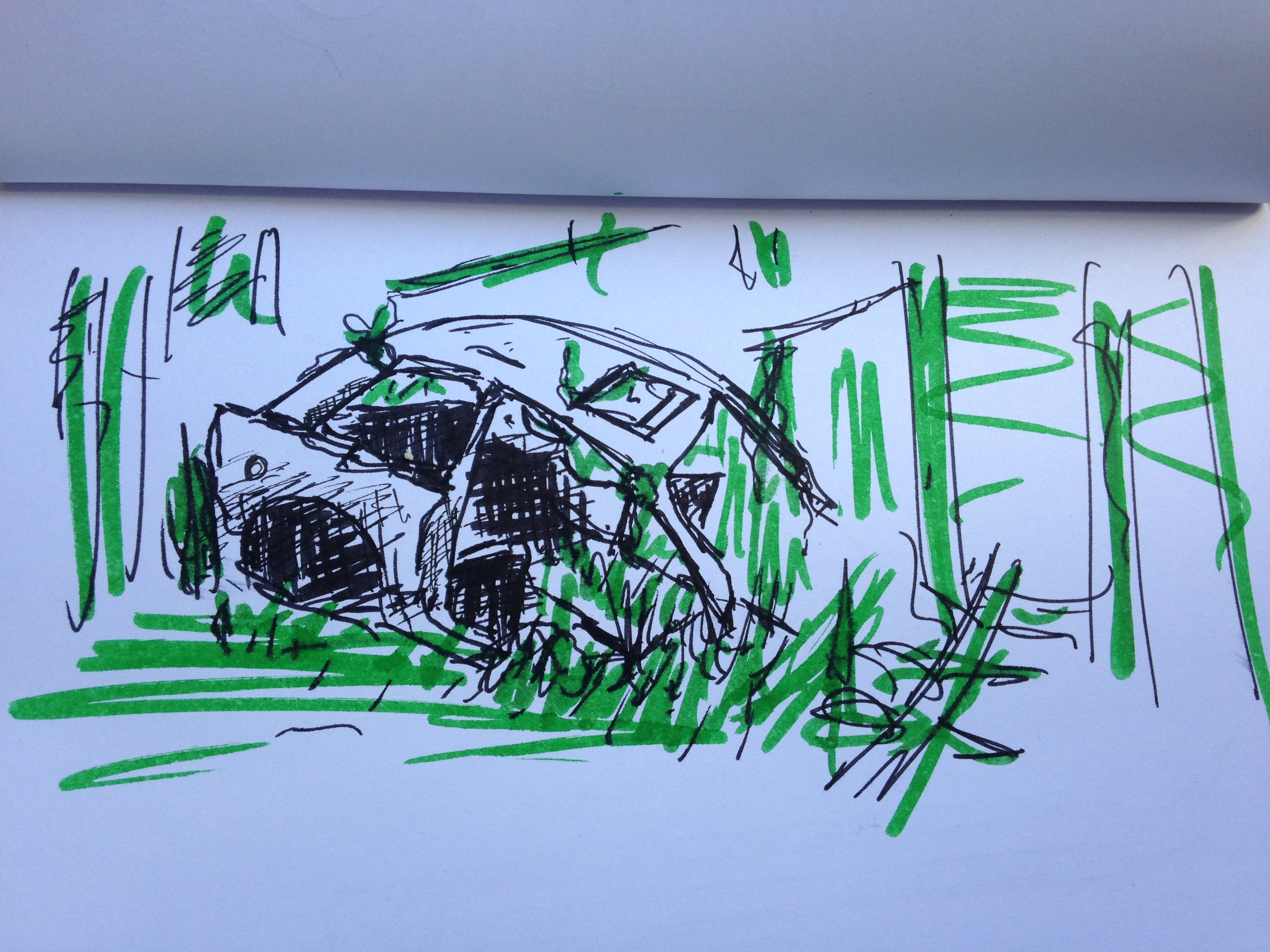 It’s a kind of mythical image for me. In his song “Bad As Me” Tom Waits calls it simply “the car in the weeds.”

One more: a pencil with a broken tip, and a pencil that has been sharpened way past its point of practical usefulness. 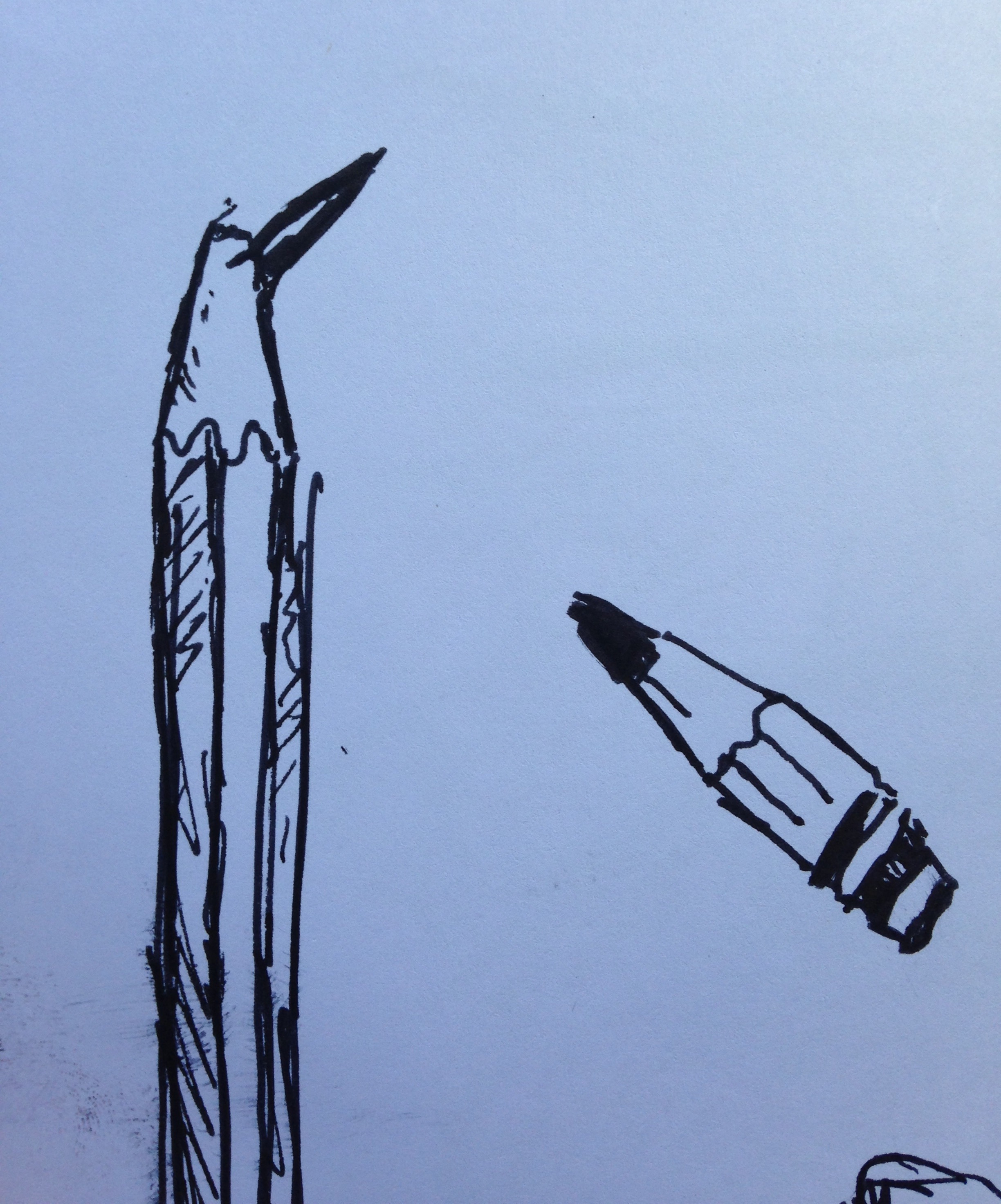 Sometimes when things break, when their ‘time is up,’ they acquire a certain kind of urgency. They come to the fore. It’s almost like they come back into existence from some kind of constantly humming background noise. All of the sudden you have to decide what to do with this thing - do you fix it? Replace it with something else? Replace it with a new version of itself? Leave it in the weeds (or the center of the Pacific)?

These questions may feel simple, or perhaps too straightforward, but they are the kinds of questions that matter for Daisen (us, humans, beings for whom being is a question) when it comes to things in our world. And because they matter to us in this way, these questions matter for how these objects are or are not in our worlds - and by world I mean the highly contingent world with which a given person is familiar and in which they live their day-to-day lives, one that is changing all the time.

Reminds me of another scene from another 20th century novel, the “Time Passes” section of Virginia Woolf’s To the Lighthouse (much of which you can read here on Google Books). Describing a home left more-or-less uninhabited for years, she writes:

“So with the house empty and the doors locked and the mattresses rolled round, those stray airs, advance guards of great armies, blustered in, brushed bare boards, nibbled and fanned, met nothing in bedroom or drawing-room that wholly resisted them but only hangings that flapped, wood that creaked, the bare legs of tables, saucepans and china already furred, tarnished, cracked. What people had shed and left - a pair of shoes, a shooting cap, some faded skirts and coats in wardrobes - those alone kept the human shape and in the emptiness indicated how once they were filled and animated; how once hands were busy with hooks and buttons; how once the looking-glass had held a face; had held a world hollowed out in which a figure turned, a hand flashed, the door opened, in came children rushing and tumbling; and went out again. … Loveliness and stillness clasped hands in the bedroom, and among the shrouded jugs and sheeted chairs even the prying of the wind, and the soft nose of the clammy sea airs, rubbing, snuffing, iterating, and reiterating their questions - “Will you fade? Will you perish?” - scarcely disturbed the peace, the indifference, the air of pure integrity, as if the question they asked scarcely needed that they should answer: we remain.”

I’d like to think more on just how my busted shoe, the car in the weeds, and the too-short pencil go about ‘remaining’ in the world, and how this might differ from their still-in-use counterparts.